November 17, 2022 – The City of Deux-Montagnes is pleased to announce that the Santa Claus parade will take place in its streets on Sunday, December 4. The procession will set off at 1 p.m. on 20th Avenue towards chemin d’Oka.

Young and old alike are invited to attend this enchanting event, marking the start of the holiday season. Children’s eyes will sparkle at the sight of magnificent allegorical floats, emergency vehicles, mascots and magical characters. Everyone will be amazed by the public entertainers, the performances of many community organizations and by other surprises along the way! The enchantment will be at its peak when Santa Claus, accompanied by Mrs. Claus, passes by before they return to the North Pole. 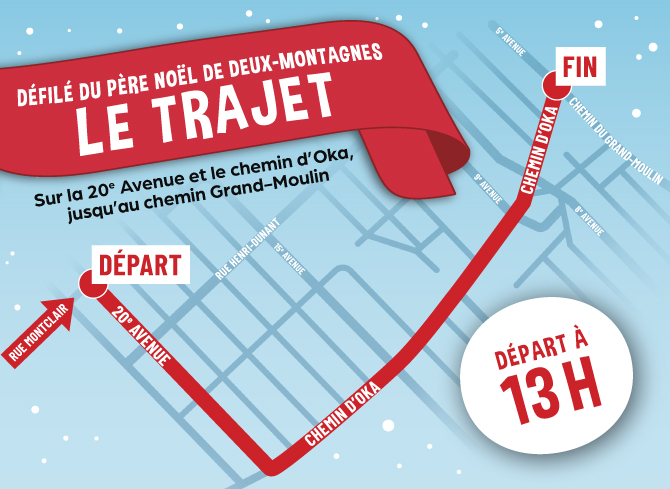 The organization La Libellule  will collect used toys (still in good condition) during the parade with their identified truck.  Plush and stuffed animals are not accepted. It’s a good time to donate the toys your children no longer play with. They’ll make other kids happy for the holidays!

A drop-off point is also accessible under the gazebo near the town hall.

Canada Post will take part in the parade and will pick up the children’s letters and send them to the North Pole. Children are invited to prepare their wish letter and bring it on December 4!

Starting at 1 p.m. and during the parade, the Dépannage Saint-Agapit  organization will collect non-perishable food under the gazebo near City Hall (803, chemin d’Oka).